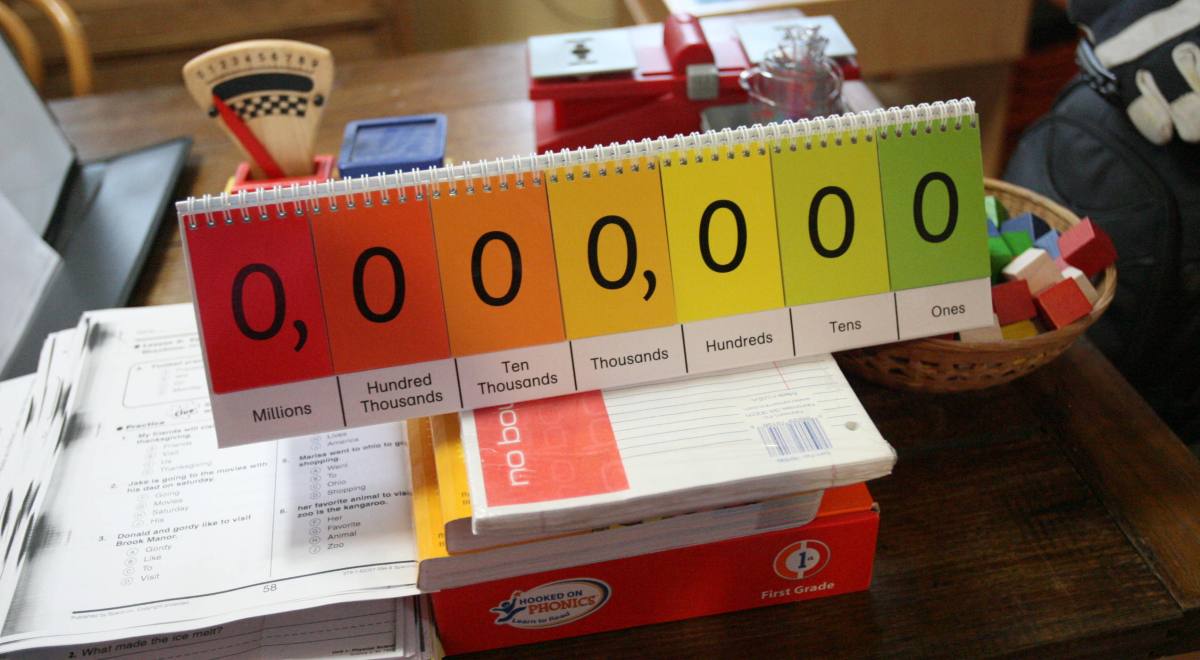 Beginning with Math, one of the activities you’ll see below is handouts copied from the girls test practice books. On these particular pages we worked on place value with addition utilizing an abacus for counting. We worked on adding up hundreds with more than two numbers. Some of the work was multiple choice answers.

We continued on with the test practice books to the language unit and worked on using a dictionary and learning alphabetical order such as listing words to form a list (also with the same first letter). We also studied and worked on punctuation.

In reading, we worked on reading paragraphs and understanding and comprehension of those paragraphs. After the girls read aloud they wrote answers about the text on their worksheets.

In word analysis, we focused on compound words, vowels and beginning and ending sounds of words. Contractions were discussed as well as work with prefixes, suffixes and root words. We finished it up with synonyms and antonyms.

In their math workbooks the girls continued adding 2 digit numbers and grouped into threes. (so 2 digit numbers with three numbers). We worked with fractions, creating the parts on a visual diagram, and writing out fraction values in numbers. They compared their fractions with greater and less than.

Using the Association Method with Language we are working in the 2nd Unit of Language now per their program. We have been working with sentences and writing for some time but these are the first planned out collective lessons where the girls are comprehending everything they now know and applying it all at one time. I prepare handwriting worksheets similar to the ones I have been creating for vocabulary and phonemes. But are in accordance to the beginning sentences described in the 2nd unit of language in the Association Method Handbook. Above photography shows sentences written on the board that reflect the handwriting sheets the girls are working on. The girls decide whether they are using a, an, the, some before the noun and they choose a picture card from the Kaufman card set for nouns. As an added bonus they happen to be speech therapy cards (as we used to work with sign language) so we work on sign language with each noun when finished filling in the noun on the worksheet in it’s appropriate place.

Above the girls work on skip counting in between setups on the board.

Alongside simple sentences and words such as nouns and articles we are studying pronouns and tenses past, present and future. By utilizing a favorite book we worked with those sentences and outfitted the board with three columns which represented all three tenses. After doing so we took a simple sentence such as: Ann is shouting and we put the words “is shouting” under the Present tense column. We then put the sentence in the Past and added “shouted” to that column. For the future we added “will shout”. In doing this we ended up with a long line of phrases that all had similarities and the girls picked up on the patterns right away. I will include copies of my ledger log for the Association Method alongside this post because I know I’ll miss something that I’ve written down and no sense in writing it twice.

In Science the girls studied the differences between herbivores, carnivores, and omnivores.

Fun with Geometry and Measurement

One of the subjects we brought back that we have been looking further into is geometry and measurement. The girls have long known their shapes and their solids but they are finally getting to apply all that information that they have learned. In addition to using the Montessori Solids we combined a flipbook of various […]